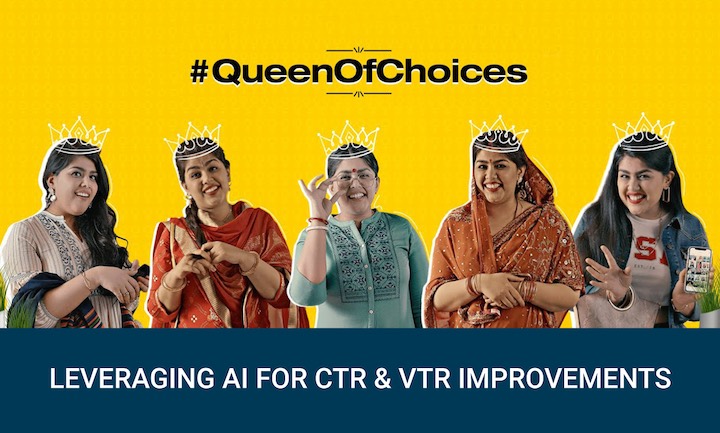 Using Delve AI (an AI-based ad-tech solution) and data from Google Analytics, Orientbell Tiles campaign created an audience persona that helped them optimize the creative and media approach as well as the impact for their Women’s Day campaign. With their #QueenOfChoices campaign, they created a digital strategy that addressed the lack of reach and interaction is its focus market of Bihar in India (based on past campaign data analysis) and concurrently increased pan-India brand awareness. The agencies that worked on the campaign include FoxyMoron (digital), The Rabbit Hole (video production) and Pollen (talent partner).

Tiles today have become an integral part of home improvement. It makes a huge difference in the way your interiors and outdoors look and feel. The Indian tile industry continues to grow at a healthy 15% per annum. Indian ceramic industry, which has the potential to be the largest producer in the world, is looking to double its turnover by 2021, according to industry experts.

Orient Bell Limited was established in 1977, with its base in New Delhi. The company has a chain of signature showrooms pan India. The product is used for both commercial and residential properties across the country.

Bihar is a major focus market of Orientbell Tiles. However, its past campaign performance results for Bihar when compared with pan-India, have been average, irrespective of whether the same was topical or generic. Therefore, the objective was to deliver a campaign that would help increase brand awareness in the focus market.

To create a topical campaign targeting the 37% Orientbell Tile women shoppers and encourage more women to visit their stores, through a campaign which projected women as being the ultimate decision-makers for their houses.

Including the persona of the resonating audience as a character in the campaign:

Orientbell Tiles integrated its Google Analytics traffic data with Delve AI, an AI-based ad-tech solution, few months prior to the Women’s Day campaign as an additional measure to analyze the consumer data of Orientbell Tiles better. This ad-tech solution creates a persona of the target audience that resonates most with the product in question, based on the analysis of the traffic and interests data reports of Google Analytics.

When this analysis was completed, the resonating audience persona derived by the AI-based ad-tech solution, for Orientbell Tiles was that of a Bihari; Female; Decision-Maker; Housewife/ Self-Employed.

Based on these persona results, (derived a few months prior to the campaign), a character of a Bihari woman was included specifically in the video campaign to resonate with the Bihar target group, a focus market of Orientbell Tiles.

For the campaign, the platforms used and audience targeted was based on data provided by the AI-based ad-tech solution. An A/B testing method was also used to measure the success of the campaign in its focus market, Bihar, specifically as compared to other pan-India territories, which was also being separately measured.

The brand, via the influencer, creator and talent management agency, Pollen featured Sukriti, an influencer known for her humorous sketches, as the protagonist. In the campaign’s video directed by the video solutions agency, The Rabbit Hole, the influencer portrayed the personalities of Indian women from different parts of the country while purchasing tiles from an Orientbell Tiles store.

The campaign was titled #QueenOfChoices, celebrating the role women play as decision-makers, whether it comes to choosing tiles or in making other decisions that transform houses into homes.

The results from Orientbell’s Women’s Day campaign showed that Bihar displayed a 10% improvement in VTR & a 50% improvement in CTR compared to other pan-India locations. The strategy of integrating the persona recommended by the AI-based ad-tech solution as a character in the video of the campaign, factored in with choice of influencer, witty storytelling and a strategic media plan, contributed to the success of this campaign.

Talking about the campaign, Alok Agarwal, Chief Marketing Officer, Orientbell Tiles said, “We wanted to encourage more women to participate in choosing the tiles for their home. They are some of the most demanding customers to please. And every time they walk-in we learn a lot, making our tiles better.”

"Delve AI's Live Persona tool bridges the gap between analytics, raw data and actionable persona insights. This platform integrated seamlessly with Google Analytics, without us having to do the heavy lifting and computed a persona for us. During the campaign, we tested the target persona, and we saw better results in target geographies suggested by the tool as compared to the others. It also helped that the team was helpful and resolved all our queries promptly."

Link to the original article

How to create personas automatically

Learn how to create personas automatically for your and your competitor’s business. By creating buyer/user personas, you can get deeper insights and intelligence to market, sell and serve your customers better.

How to use personas for competitor analysis

Performing regular competitor analysis is all about seeing where your company stands, where it could be and to identify opportunities to piggyback on the strategies of competitors. Learn how to conduct competitive research to build competitor personas.
View all blog articles ->

Create personas easily. Get ideas to expand your business.

No credit card or code needed. Result in minutes.